Seeress
a collaboration with Annelie Nederberg

"...awe-inspiring 3D-like structures in an equally awe-inspiring space, maybe it is the inner, vibrating strings of matter." Gavle Daily


‘Seeress’ features kinesthetic sound artist Annalie Nederberg performing live with her feedback instrument immersed within al’Kamie’s animated surreal worlds. It is inspired by the Völva, the Old Norse Seeress, and highly regarded in Viking society for being able to foresee and influence the future. Nederberg is interested in this character, and what she would do/be in a contemporary society, if she uses the premise that all times exist simultaneously. In the Old Norse world view, the world was created not out of nothing, but out of the destruction of something previous. This circular causality is also reflected by the use of Nederberg’s music feedback instrument. Hence, the performance is both conceptually and practically connected to viewing the world as circles of causality, instead of a linear narrative. 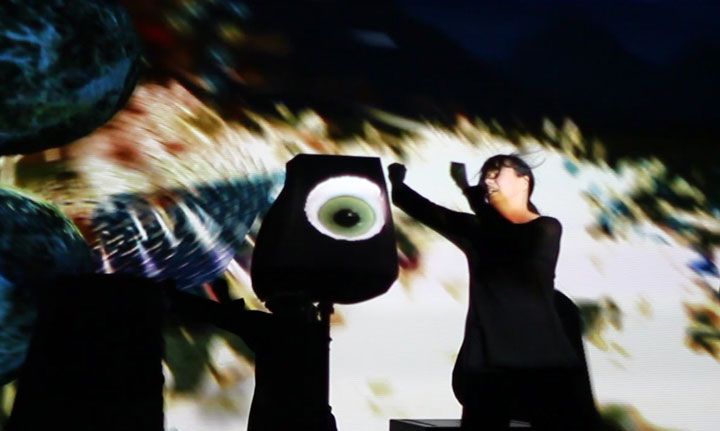 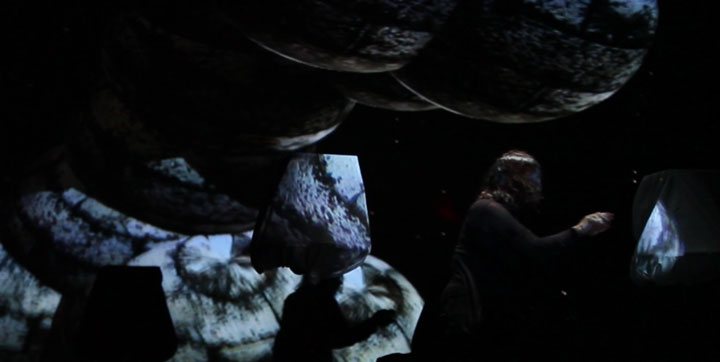 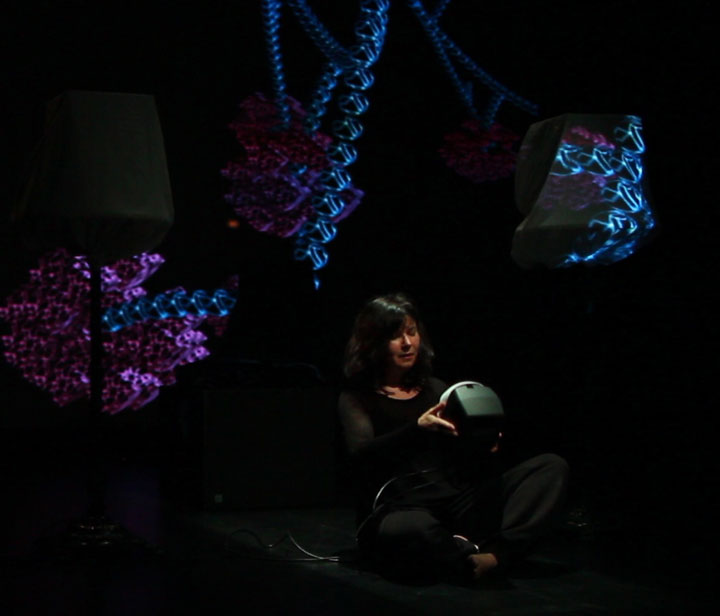 "Both Brian and Robyn are utterly creative, generous and professional. They have a shedload of experience in all sorts of performing arts contexts" Annelie Nederberg 2014 read more

Annelie asked us to work with her on a number of different levels: with movement; with story; with theatre and of course, with scenography. Through sketches, playing, workshops, sound and movement the piece materiallised from her initial inspiration, the Völva and her incredible sounds, to create the final performances.

Resident in England where she studies composition, musician and composer Annelie Nederberg is a returning visitor to IDKA. Now she is finishing off this season's concert series together with the live video artist alKamie (Brian Curson) and the work Seeress.

Using a custom built, movement controlled feedback instrument, where the sounds are generated by microphones that she wears on her hands and loudspeakers that look more like old fashioned floor lamps with green iron stands (and furthermore a little button panel on one arm that controls a synth) Annelie Nederberg is exploring the relation between movement, sound and music.

This together with alKamie's live video projections, which in real time build outlandish space worlds reminding both of the graphic artist Escher's strange geometric constructions and fabulous game worlds.

Everything is improvised within a frame of a few different composed scenes and is a meeting between image and sound and movement, with traces of mythology and ritual.

It starts in the dark, soon white planets are rising and a pair of green eyes are sailing down and attaching themselves to the loudspeakers out of which the sounds are sculpted, pulled and rubbed, made to vibrate.

Annelie is wearing a white mask we can see when she turns around towards us, and the planets are dividing, more resembling cells now, awe-inspiring 3D-like structures in an equally awe-inspiring space, maybe it is the inner, vibrating strings of matter.

The sound is ringing and singing forth a sci-fi archipelago with islands and soaring spheres. But the illusion is broken in darkness and Anneli is now another, unknowing person who in wonderment rediscovers us and the instrument anew, now it roars and the intensity grows into a wild dance in an apocalyptic world where fire storms rage.

But then she sings to the mask, sings forth beautiful pink and blue space flowers around a beaming sun, forms of consciousness, the form of singing.

It has been a small tour, this was the last performance and how quickly everything flickers out, is taken down, where we just now were close to falling in flaming crackling worlds is now again stage dust, only dust.